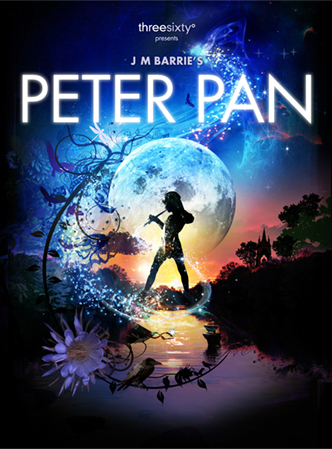 One of the finest productions has come to town; Peter Pan, the beloved story made famous by Scottish author and dramatist J.M. Barrie. Located at the Chicago Tribune Freedom Center on 650 W. Chicago Avenue (at Halsted) until June 19th, this long-awaited masterpiece debuted on Wednesday May 4th, 2011 to the likes of a packed house along the majestic Chicago River.

Brought to Chicago by London-based threesixty° entertainment, this theatrical adventure is unlike anything you’ve ever seen before. Held inside a massive state-of-the-art white tent, twenty three actors, whimsical puppets, captivating music and visually stunning special effects consume the senses for two hours in an intimate stage setting known as “in the round” providing a birds eye view of the stage. Thanks to the innovative location of the stage, there is not a bad seat to be found.

The entire wait staff and employees, from the front gate all the way to the inside of the tent were extremely polite and exceptionally professional in their interaction with theatergoers.

Upon entering the outdoor pavilion beside the tent, an elegant gathering area was assembled to host patrons before show time. Various types of seating topped with beautiful floral arrangements and flame less candles adorned the tables while the large outdoor heating lamps were the perfect touch to keep warm on the chilly spring evening.

Beginning promptly around 7:00pm, the colorful cast of characters took the stage and began the journey into the world of Peter Pan. Without giving away all of the secrets to the performance, I will point out a few of the most memorable scenes from the evening.

The inside of the tent is lit with over 15,000 square feet of Hi-Resolution video- three times the size of an IMAX screen. You truly feel as if you are part of the timeless tale of Peter Pan and for just one night, you are fully immersed body and soul in their carefree existence and childlike innocence. 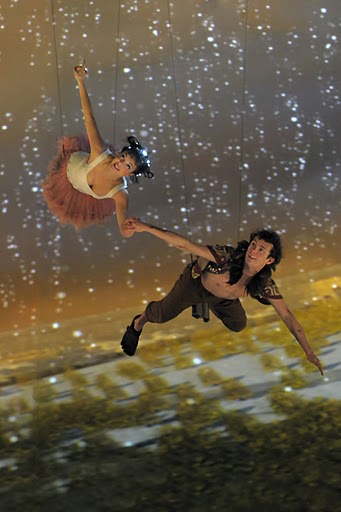 The initial flying scene where Peter Pan invites Michael, Wendy and John to escape from their London town home to Neverland was breathtaking. The audience is virtually taken on a ride into the dark night sky as the children soar over the beautiful landscape of downtown London through the realm of time. Upon reaching Neverland, the scene quickly changes into a tropical paradise complete with sparkling water, palm trees and golden rays of sunshine.

The cleverly crafted humor and witty representations of each member’s striking personalities were the most enjoyable trait that they possessed. It is clear that while all the actors were true stars in every sense; Peter Pan shone the brightest in my opinion. Another outstanding scene is the underwater sequence where Michael and John come across two mystical mermaids. The mermaids eloquently moved about while sending the audience into complete awe as they spun around in unison midair. It rendered an extravagant likeness to a Cirque du Soleil theme giving it a “Las Vegas” touch.

I highly recommend this production to all who believe in creativity, artistic diversity and those who are young at heart. This is one of the grandest stage shows to come to the United States and we are quite privileged to have it here to enjoy first.

I truly thought that it was very imaginative and impressive that towards the end of the production, the director incorporated a scene where Peter Pan and the children fly to Kensington Gardens. The scene takes on a whole new meaning of significance because that is the very exact locale where J.M. Barrie found the inspiration from the Llewelyn Davies children to write his novel. It all came full circle for Peter Pan and the scene paid great homage to J.M. Barrie.

My only dismay with Peter Pan is the actor that portrayed “Tinker Bell” was overly obnoxious in her delivery and the costume she wore could have been much more appealing visually. One’s ideal vision of Tinker Bell would be an emerald green dress covered in dazzling sparkles with a pixie haircut and glowing wings. Instead, the actor wore a revealing white tank top with a pink tutu and lights weaved into her hair. 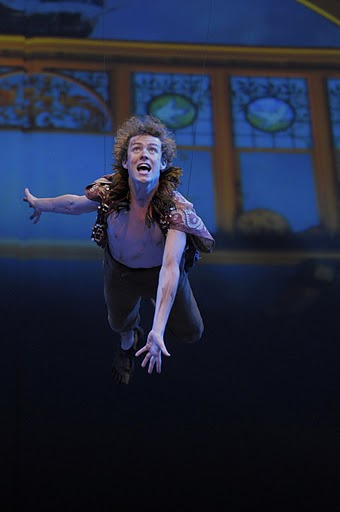 While most of this production is “family-friendly,” there are a few minor flaws that need parental attention; Tinker Bell uses the word “ass” several times throughout the play which is greeted by comedic reception, the Tiger Lily dance number performed to Peter Pan as sincere thanks for her rescue from the Pirates is quite seductive for young eyes and the fight scenes between Peter Pan and Hook may startle youngsters under the age of five. There is also a scene where Hook lures one of his brainless crew members towards him and then emulates slaying his neck with his hook.

Don’t miss this sensational show filled with majestic surprises, top notch technology and a solid cast of phenomenal actors. Gather your friends and family for one of the most memorable adventures you will ever take part in your life!

We'd like to thank Margie Korshak Inc. for allowing Showbiz Deluxe the opportunity to attend the Peter Pan theatrical production on Wednesday May 4th, 2011 in Chicago.

Tickets for Peter Pan may be purchased here: http://www.peterpantheshow.com/venues/chicago/#/tickets_and_info