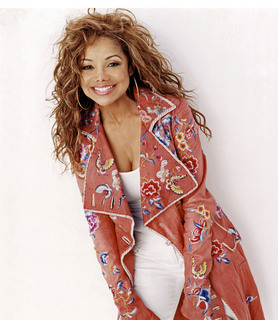 Most recently seen on the smash NBC television show “The Celebrity Apprentice,” La Toya made history by being the only contestant to be fired, re-hired and then once again fired by Donald Trump although La Toya’s convincing proposition to reclaim her job title was granted by Mr. Trump in the final weeks of the show. Returning to the boardroom, La Toya joined “Backbone,” the men’s team and raised an impressive $65,000 for AIDS Project Los Angeles during her tenure on the entire program. She also participated in the season finale episode serving as a team member for Marlee Matlin’s 7-Up Challenge in which she lost to country music star John Rich.

Almost two years to the day, on the anniversary of her late brother Michael’s untimely death (June 25th, 2009), La Toya arrived into the upper level of the bookstore wearing an elegant crème pantsuit and a matching blazer with glamorous jewelry adorning her neck. Greeted by cheers and applause, her stunning porcelain like complexion and gentle persona immediately captured the attention of the numerous adoring fans waiting to meet the entertainment superstar.

Prior to the book signing, La Toya posed for photographers and conducted brief one on one interviews with members of the media. Once the signing began, La Toya graciously interacted with each individual that purchased her book. She listened to their stories, shook hands and even posed for pictures with them. Her sincere appreciation and love for her loyal base of supporters is beyond words.

We’d like to thank Briana Gutasfon of It Girl Public Relations, Barnes & Noble and Jeffré Phillips of Ja-Tail Enterprise for their generous accommodations to Showbiz Deluxe. Of course we also send sincere gratitude to Ms. La Toya Jackson for allowing us to interview her in person; she truly is a first class celebrity in every sense.

La Toya Jackson was always closer to Michael than anyone knew. In “Starting Over,” she pays tribute to his tortured soul, revealing the intimate moments she shared with the deeply troubled pop legend. For the first time, La Toya has unveiled shocking behind-the-scenes dealings that she believes led to her brother’s death, and she provides unprecedented insight into the destruction of one of the most dynamic artist/performers in history.

La Toya sheds new light on the dynamics of the Jackson family and the curtain of secrecy and intrigue that has surrounded her brother Michael, and the rest of the Jackson children, since they became stars in the ’60s and ’70s. She explains her estrangement from— and gradual reconciliation with—one of America’s most famous and close-knit families. Like Michael, La Toya experienced an upbringing that made her vulnerable to exploitation, and her own journey led to hell and back at the hands of her former manager and husband, Jack Gordon. Sharing with honesty and an open heart some of the most painful episodes of her life story, La Toya reveals how anyone—regardless of fame, fortune, or status—can be trapped in a cycle of abuse, and how she was able to...

Enjoy pictures from the book signing below; (Courtesy Christian Scalise.)