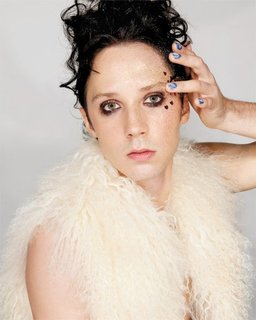 Known for his flamboyant and larger-than-life persona, Johnny has captured the attention of critic’s alike and loyal fans worldwide on and off the ice with his impeccable flair for fashion, skating, and television.

Making the event even more special was the fact that Johnny chose to debut his very own dress line collection being sold exclusively on eDressMe.com prior to the Ice Dreams program in addition to having film crews on hand to capture the evening for the second season of “Be Good Johnny Weir” slated to air later this year on the LOGO channel.

Johnny’s extreme talents as a fashion designer were on full display as live models stepped into the VIP area of the arena to pose for photographers wearing the various pieces from the dress line collection.

The red carpet event gave the media and select fans an inside look at the beautiful collections firsthand. Johnny took the time to converse with members of the media and answer their questions during his red carpet appearance. Johnny conveyed an extremely professional demeanor and exhibited grace and humility in front of the star struck crowd. I’d also like to mention that longtime and very supportive fans came as far as Japan to take part in the special festivities honoring Johnny.

The skating event began a bit after 7pm much to the delight of a sold-out crowd awaiting Johnny’s arrival on the rink. The most intriguing factor about the show was that Johnny gave a vast group of local and national skaters of all ages the chance to showcase their individual talents on a grand platform.

The energy in the arena was at an all-time high. The skating numbers ranged from solo to group to partnered performances with upbeat pop culture artists such as Beyonce, Christina Aquilera, Katy Perry, Enrique Iglesias, Frank Sinatra, and Rihanna playing on the loudspeakers.

Johnny wore a variety of flawless costumes throughout the evening adding versatility to the show. The range of the elegant yet edgy fashion forward costumes completed the already show-stopping excellence of the dedicated young talent’s personality.

After a brief intermission, Johnny returned once more to the show skating to his signature Lady Gaga tune “Bad Romance” which drew unstoppable cheers and applause from the crowd. Johnny was overheard telling the press earlier in the evening that he soon may not be skating to that number much longer; time will surely tell.

Closing out the evening of pure entertainment, Johnny and all of the headlining skaters joined together in a rousing number while Lady Gaga’s “Born This Way” set the musical theme for the finale.

We’d like to thank Johnny Weir and his management team for allowing Showbiz Deluxe the opportunity to interview Johnny and attend Ice Dreams 2011.