Check out Part I of our interview with sensational new band, St. Lucia. In Part I of the interview the band discusses their latest album “When The Night,” the creative process behind the new album, what fans can expect at their live shows plus much more!

Enjoy Part I of the interview right here: http://www.showbizdeluxe.com/stluciainterview14.htm 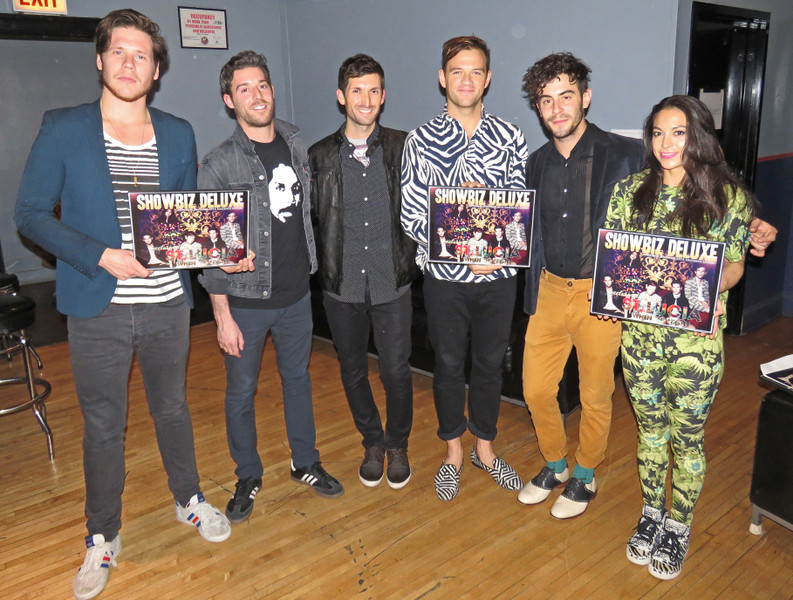 The stamina and stage presence of all members, especially Jean-Philip was quite remarkable. Throughout the entire evening Jean-Philip danced and played along with his guitar while a stunning light and video show took place on the stage.

Make no mistake, this band is headed for superstardom and it’s only a matter of a few years before they become as recognizable and successful as Coldplay. There’s something very unique about the quality of their sound, style and genuine bond with each other. We look forward to the expansion of St Lucia’s music and watching their already solid fan base continue to grow across the globe.

Currently on a national tour in support of their latest album “When The Night,” St .Lucia (consisting of Jean-Philip Grobler, Patricia Beranek, Ross Clark, Nick Paul and Dustin Kaufman) has recently toured with Ellie Goulding and Charli XCX, performed at festivals including Lollapalooza, Governors Ball and Firefly, not to mention shared stages with fun., Two Door Cinema Club, Young The Giant, The Shins and more.

Stay tuned for Part I of our exclusive interview with the band later this month. In the meantime, visit www.StLuciaNewYork.com to learn more about the band and for tour dates!

While it may have been just a short time I knew her, my few interactions with the great Joan Rivers were pleasant and memorable ones. I recall the very first time that I interviewed Joan for Showbiz Deluxe in winter of 2012...

All through the month of September to commemorate Craniofacial Acceptance Month you have a chance to win a signed Donny & Marie prize pack. CCA is celebrating its 25th anniversary this year and for every $25 donated your name will be entered into a drawing for the autographed 11x16 CCA poster which Donny & Marie kindly autographed and official Donny & Marie tour program.

Playing at the beautiful theatre for seven show-stopping performances, the iconic duo brought their sensational production all the way from the Flamingo in Las Vegas to the Chicago land area.

This cover presentation commemorates the exclusive interview conducted with Donny & Marie on Showbiz Deluxe. The interview can be found here; http://www.showbizdeluxe.com/donnymarieinterview.htm 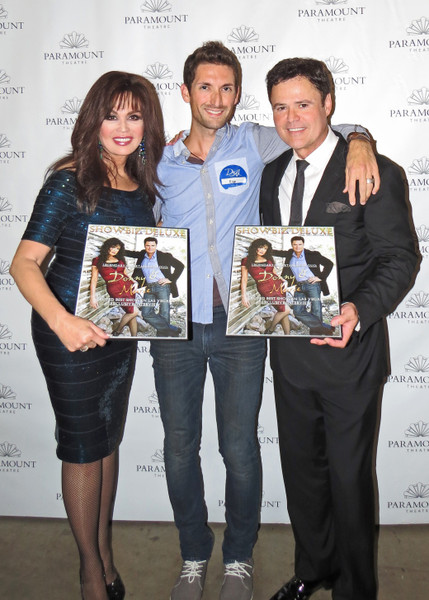 In addition, Donny & Marie were gracious enough to pose with a poster to help raise awareness for our dear friends at CCA (Children’s Craniofacial Association) in honor of Craniofacial Acceptance Month which officially kicked off September 1st! (Also, thanks to Jill Patterson of CCA for sending along a Vineyard Vines silk CCA logo tie to present to Donny Osmond, also pictured below!)

We would like to sincerely thank Donny & Marie for taking the time to meet us backstage after the show and for their kind, loving and genuine desire to support the children of CCA by posing with the poster; 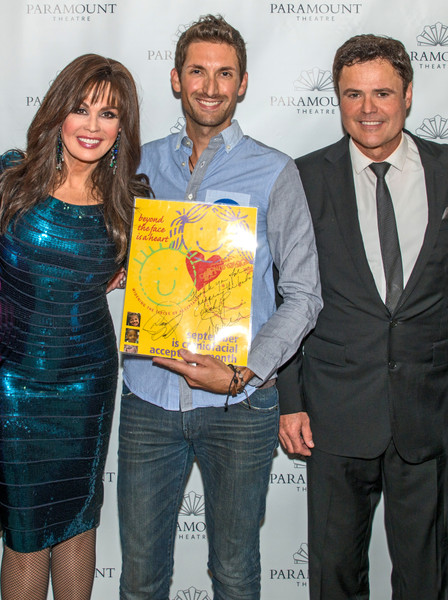 See more info on CCA below;

2014 marks the 10th year CCA will observe September as Craniofacial Acceptance Month across the nation. Each year CCA families, friends, volunteers and related support groups band together to widen the circle of acceptance for individuals with facial differences. The goal is to create awareness of craniofacial differences and to get people to see that “beyond the face is a heart.” To learn more about the CCA and to donate, check out their official website here; http://www.ccakids.com/index.html

We are extremely pleased to reveal Part I of our interview with multi-talented award winning and Emmy nominated director, creator and choreographer Doriana Sanchez. The entertainment veteran talks about her nineteen hour brain surgery and miraculous recovery, finding healing through music and movement, reflects on the early days of her career PLUS more!

Check out the interview, gallery of photos and special video greetings here: http://www.showbizdeluxe.com/dorianasanchezchat.htm

Chicago, IL (June 9, 2014) - This past week, Showbiz Deluxe was privileged to meet and present multi-talented award winning and Emmy nominated director, creator and choreographer Doriana Sanchez with her official summer 2014 cover story. On an off day in Chicago, the entertainment veteran graciously shared her time with SD for the official cover presentation at her downtown hotel.

Later this month, Showbiz Deluxe will release Part I of our interview exclusive with Doriana to highlight her fascinating career in show business, near death experience, healing through music and movement, working for music icon Cher for nearly 30 years plus much more.

Don’t miss this rare and revealing article with one of the entertainment businesses brightest stars!!

She received a TEA award for Outstanding Achievement, for Resorts World’s Crane Dance, in Singapore Harbor, the largest animatronic water and video spectacular in the world and was Director and Choreographer for Festive Walk’s Lake of Dreams also at Resorts World.

Doriana’s television credits include the Grammy Awards, American Music Awards, Divas Live, Euro VMAs, Blockbuster Awards, The Oprah Winfrey Show, Be Good Johnny Weir and 10 seasons as Resident Choreographer on Fox’s hit show So You Think You Can Dance. Currently, Doriana is thrilled to be in production on Dream School USA for the Sundance Channel.** 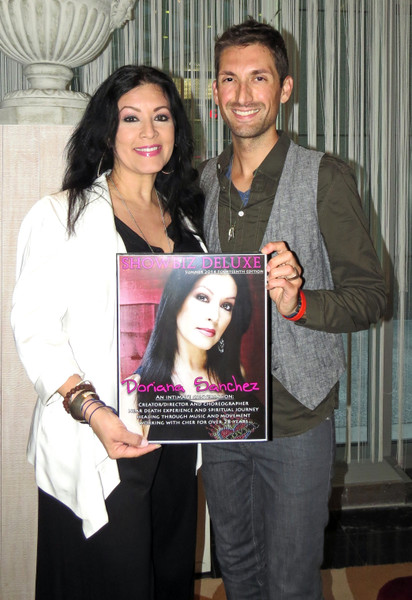 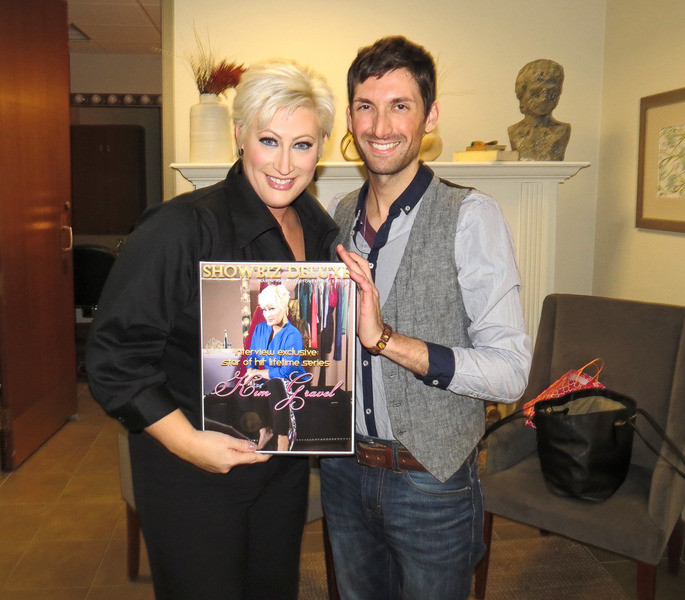 It is with great honor that we share Part I of our exclusive interview with 10-time Grammy Award-winning singer/songwriter, the iconic Chaka Khan! In Part I of the interview, Chaka recalls the early days in her hometown of Chicago, discusses her latest musical project, pays tribute to dear friend Whitney Houston and MUCH MORE!

Read Part I of our interview with CHAKA KHAN: http://www.showbizdeluxe.com/chakakhaninterview.htm